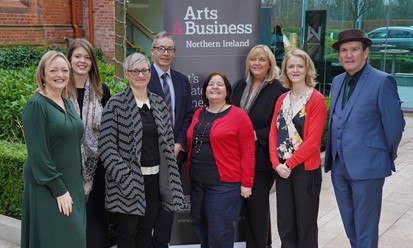 At the morning plenary we heard from James Magowan, Northern Ireland Development Officer at Association of Charitable Foundations who offered key advice 'Follow up. Follow through.'  Lou Errington from The Paul Hamlyn foundation urged Arts organisations in Northern Ireland to ensure to submit their funding applications Clare Beavan introduced the DWF Foundation, founded from DWF LLP a multinational law firm headquartered in Manchester with 27 offices across the world.

Damian Smyth represented the Arts Council of Northern Ireland and pointed out that the spending on Arts per head per capita in Northern Ireland is £5.37 whereas in other parts of the U. K. this figure rises to £10.58 per person, he highlighted the need to recalibrate to increase this figure for Arts in Northern Ireland moving forward. The morning plenary concluded with a question and answer session addressing NI arts organisation’s main concerns, including the ability to apply to Trusts & Foundations to cover core costs. Trusts & Foundations highlighted that applicants must bear in mind that they are also charitable organisations, therefore they share in some of the issues that small Arts organisations face such as dealing with a limited amount of staff.

There was also a strong emphasis placed on the importance of forging a strong funder-applicant relationship and the necessity to communicate, update and clarify before applying.  Brona Whittaker, Arts Manager at Arts & Business NI reiterated that Arts & Business supports members in their applications to Trusts & Foundations with the understanding that time constraints play a huge role in application rates, therefore she encouraged Arts members to avail of the resources provided in the member only section of the Arts & Business NI website and reach out for support while crafting and refining applications.