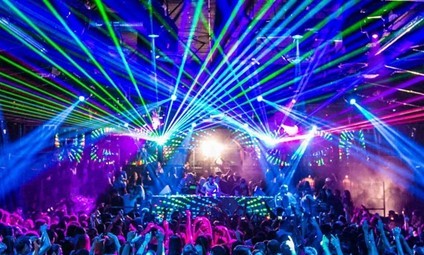 Iris Colour has supported the biennial Belfast Photo Festival since its inception in 2011 to help promote photography in Northern Ireland. In 2015 festival director Michael Weir felt it was time to do something to give more of a focus to the Belfast-based printing company.

“Previously the projects we worked on were internal exhibitions featuring Iris Colour branding and stating its support. I felt the best way to give more profile to the business was to create an outdoor hub, which we always wanted to do, and call it Iris Colour Photo Park,” Weir explains.

“This put Iris Colour at the centre of the festival in a high visibility location with a large billboard and meant that any time the Iris Colour Photo Park was mentioned in the media the company was always referenced.”

The project involved the founding of Northern Ireland’s largest outdoor visual arts display and showroom for Iris Colour in the centre of Belfast. This consisted of two elements - the Iris Colour Photo Park itself in Writer’s Square and the DeLorean Sculpture on Belfast City Hall lawn – which reached a total audience of 40,340 visitors.

The Iris Colour Photo Park consisted of a ‘village’ of steel transport containers and wooden cabins in which keynote exhibitions were produced by Iris Colour and presented by the festival – no exhibition of this kind had been organised in Northern Ireland before.

“Because the Iris Colour Photo Park was an open space people could walk through and experience it as part of the general environment,” says Eleanor McCann, Iris Colour chief executive.

“We had never been involved in an outdoor fine art exhibition and it was a project that evolved as it progressed through working with Michael [Weir] and the photographers to find the best solutions.

“While we provided funding, we also produced the majority of the work and had control over the quality of work that was shown.

“One of the main benefits of the project for us was that from a company branding perspective it really showed what we’re capable of doing, ie providing solutions to any display problems. It reinforced Iris Colour’s position as the preferred company for photographers to work with to get their work printed.” The DeLorean sculpture truly got this message across in a very innovative way. This ambitious artwork consisted of photographs printed directly onto aluminium to create a full-scale replica of the DeLorean time machine – showcasing a printing method and product offering unique to Iris Colour.

“I was aware of French artist Cyril Hatt’s work in terms of building things with photographs and liked the concept. 2015 was the 35th anniversary of when the DeLorean car was first unveiled to the world and also the 30th anniversary of the ‘Back to the Future’ film so it ticked a lot of boxes as an idea,” says Weir. “No other printer on the island of Ireland could have produced that car. Eleanor of Iris Colour has always told me about the new things possible in printing and I was quite happy to come to her and say ‘here’s an idea that only you can execute’.

“The DeLorean sculpture really caused a stir and was a great promotional ‘vehicle’. The unveiling attracted massive publicity and an enormous footfall of 30,000, meaning that both Iris Colour and the Belfast Photo Festival reached a whole new audience - over 70pc of people visiting the exhibition said they were new visitors/participants.”

Aside from the increased brand exposure that Iris Colour got through the partnership, the company generated £10,000 in new business in the month of June as a direct result of the 2015 project.

Staff also got involved in key stages of the project, including hanging and installing exhibitions during the festival and participating in the production/creation of promotional footage. This allowed Iris Colour to embed arts within its organisation.

The partnership between Iris Colour and the Belfast Photo Festival continues to develop with ongoing elements including the touring of the DeLorean sculpture throughout Northern Ireland.